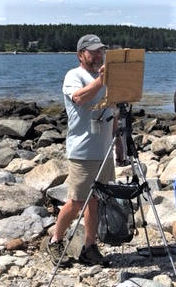 As a Connecticut-based artist, Peter Barrett has been painting marine art and various landscapes throughout New England since 1993. His art is representational of the subjects that he is most fond of including boats, seascapes, and shorebirds.

Successful in business and as an entrepreneur, Peter enjoys his time painting the most. He has been mentored over the years by teacher and now good friend, Elizabeth Sennett, who along with his wife, Nancy, gave him the initial encouragement to pursue his talent. For the past several years, Peter has also painted with a group of artists led by renowned artists, Donald Demers and Mary Erickson, at various locations around New England and Florida. The workshops have helped Peter hone his skills and expand his style and subjects.  "I enjoy painting both on location and in studio.  It is most enjoyable to paint a scene with natural lighting and the surroundings of the subject.  Creating this visual memory and bringing it back to the studio often produces some of my best work."

Peter is a graduate of the U.S. Coast Guard Academy, and has one of his paintings, “Furling Sail at Sunset”, on permanent display at the Academy Alumni Building, one of his most cherished honors.  He was a minority owner in the Maple & Main Gallery of Fine Art in Chester, CT and was the Gallery's President and CEO until its closing in 2017. Peter has displayed works that have been juried at Hartford Fine Art, Lyme Art Association, Slater Museum, the Pequot Library, the Salmagundi Club of New York and the Mystic Outdoor Arts Festival. He is an Elected Artist Member of the Salmagundi Club, an Associate Artist Member of the Lyme Art Association and active with the East Hampton Art Association.